how to Take Group Selfies Where Everyone Looks 🔥 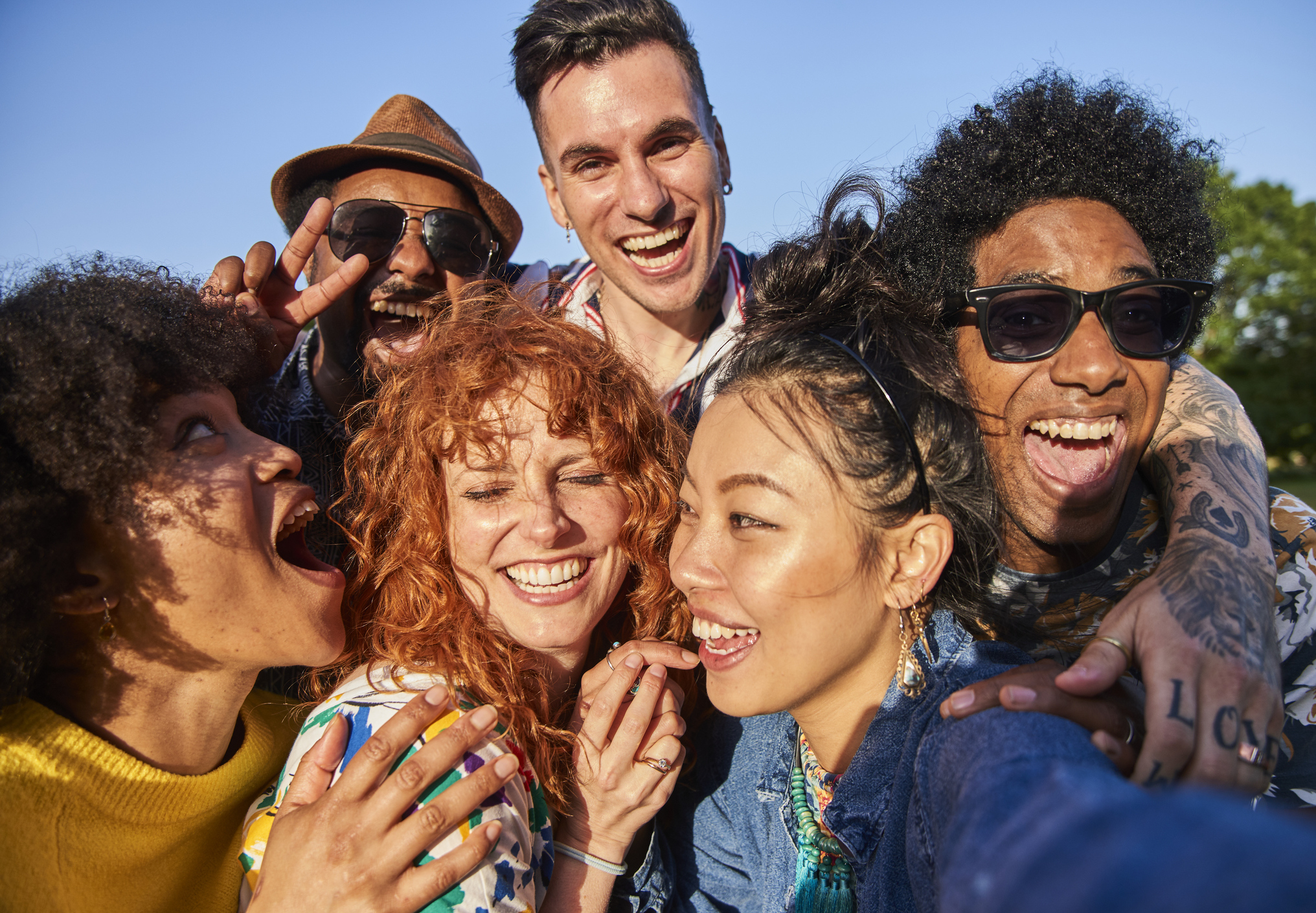 It's an age-old question: How to take a group selfie. The "us-ie". Just like the amount of times it'll take for you to get a great group shot, there’s been failed attempt after failed attempt to come up with a cute branded name for this thing, but nothing has stuck so far. So, the group selfie. By whatever name, it’s become a social media staple, a means for us to express ourselves in numbers and get likes, followers, and retweets.

You’re probably familiar with the most famous group selfie ever taken: Ellen Degeneres's iconic Oscars selfie from 2014, which featured famous Bradleys — Cooper and Pitt — among other celebs. It was retweeted 1.8 million times in an hour, beating the previous record held by Barack Obama after his 2012 presidential victory.

More recently, the Pope’s gotten in on the action. His group selfies with young fans generate tons of likes, and his Instagram account, @Franciscus, now has nearly 9 million followers.​ Holy moly!

Our girl Jennifer Aniston joined Instagram in 2019, posting a group selfie with her "Friends" costars. That photo nearly broke Instagram, with 2 million likes in three hours.

Kylie Jenner delighted her 174 million followers in 2017, rebelling against the “no photo rule” at the Met Gala in New York City by taking a group bathroom selfie with as many A-listers as she could get crammed into the frame.

So, what’s the secret to snapping a good group selfie? I've gathered the best tips and tricks to answer that question and help bring out your inner Kardashian.

It’s best to have lots of options. Use the "burst" feature on your phone, as you’ll get more candids and they often turn out better, funnier, and more relatable.

2. Let There Be Light

When it comes to light, the more natural, the better. When in doubt, look for the nearest window and avoid using the flash. It could make everyone look washed out and zombie-like, so unless that’s the look you’re going for, mark my words. Make sure your light source is not behind you (this includes the sun, if that’s your light source), and don’t take your selfie ​directly underneath​ a light unless you want a shadowy, distorted face. Remember, your photo will be more pixelated (AKA blurry) the farther away it’s taken from the light source. So go on, look for the light!

Don’t be afraid to use your timer. Keep in mind that the longer you set it, the longer the group has to get really self-conscious. So, in general, the quicker you take the picture the better, or everyone will end up with duck lips and eyes closed.

4. Find Someone With A Long Arm

You totally have our permission to use a selfie stick. But it’s hard to have one on hand during those spontaneous, snap-worthy moments — so if you can’t use one, enlist the friend with the longest arms.

5. Remember The Rule Of Thirds (Or Don't)

This classic technique can help put the visual emphasis on your subjects. Mentally divide the frame into three sections — horizontally and vertically — and place the interesting visual elements in your photo at the intersecting gridlines. What’s visually interesting? How about the friend in the sparkly red dress, or the champagne glasses clinking together as you raise them to cheers while simultaneously capturing the shot?

Rules are made to be broken, though, and if you don’t understand what the hell I’m saying, feel free to completely ignore the rule of thirds and do your own thing. Plus, the rule of thirds for a group selfie requires a lot more coordination than you may have at the time, but read on for tips on fixing that.

The director can be the picture-taker or someone else, but just pick one person to orchestrate the photo. Too many photographers in the kitchen will spoil the selfie broth. Or something. Of course, the selfie “director” and person who posts it on Instagram or Twitter may be different people, so you may have some opposing interests (think: the guy with the longest arms who just wants to get it over with and get back on the dance floor vs. you, ready to pose for as long as it takes if it means you’ll get more likes). Another case in point: The Oscars selfie was taken by Bradley Cooper but posted by Ellen, who got the overall credit. I’m betting he was the long-armed one. Sheesh.

A universal truth: The higher up you hold the camera, the more flattering the photo will be for everyone. Also, the farther away you hold your camera, the more group hugs (and middle fingers) you can get into the picture. The downside: If you point the camera down at too much of an angle, everyone will have a really huge forehead. You cannot win ‘em all.

How you position yourselves in the photo is just as important as lighting and camera angle. Pros will tell you to turn your body and face just slightly if you want to get a great selfie. It’s easier to pull off a pose that's flattering when you’re angled and not full-frontal.

9. Don't Stand On The Edge Of A Cliff

Accidents happen. A photo may be worth a thousand words, but it’s not worth it if you fall into an abyss. More people die from selfie-related deaths than from shark attacks. You read that right! Jump into that exotic ocean freely, but stay super alert when you’re group selfie-ing at the edge of a sheer drop-off.

Pull out these tips the next time you and all your friends are photo-ready. Or next time you meet a group of famous people or show up at the Oscars/Met Gala. Keep in mind that sometimes random incidents that seem like mistakes result in the best shots. Leave room for surprises in your next group selfie!